Cetaceans-Fisheries Interactions in the Med 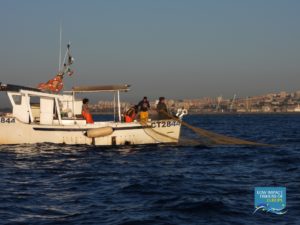 The initiative involves the close collaboration between scientists and fishers,

combining fishers local and experiential knowledge with scientific information in the quest for solutions.

The month of August saw LIFE and its partners launching an initiative in 3 areas of the Western Mediterranean to document the interaction between small-scale fisheries and cetaceans – in Andalusia, Spain; Sicily, Italy; and in Malta. The project aims to tap into the rich local and experiential knowledge of the fishers to document the extent and severity of interactions with cetaceans, to understand the intensity of the problem, and to propose solutions.

The project is supported by the MAVA Foundation. MAVA has a keen interest in protecting threatened, endangered and sensitive species (TES) and is seeking solutions through engaging with small-scale fishers and promoting exchanges on best practice between them.

The initiative builds on existing collaboration between fishers and scientists in the region, and a successful outcome depends on close cooperation between them. In Sicily, fishing operations will become “floating laboratories” where the interactions will be observed, documented, and analysed by scientists. The initiative also seeks to combine the local and experiential knowledge and data generated by the fishers with the data gathered by the scientists to provide joint solutions reached both parties. This is in line with one of LIFE’s core objectives, which is to document the Traditional Ecological Knowledge (TEK) of small-scale fishers, and to promote its use by scientists and fishery managers in decision taking processes.

A prosperous livelihood from fishing requires safe and secure access to productive fishing grounds and to resources. Meeting these requirements is proving ever more difficult for small-scale fishers, and nowhere more so than in the Mediterranean. Increasingly small-scale fishers must contend with such problems as overfishing, climate change, pollution and invasion of exotic species. They must also compete with predatory marine mammals and birds, which may often be threatened, endangered and sensitive species (TES).

The study will record incidences of entanglement of cetaceans as by-catch in fishing gears as this may be life threatening, and cause suffering. The results of the study should provide insights into how these and other harmful impacts can be reduced.

The study will produce a better understanding of the problem, and aims to provide information on possible mitigation measures to be used, hopefully moving beyond the use of “pingers”, and to raise awareness among the administrations and decision-makers on the issue and to favour common practical solutions to common problems.

LIFE is also developing a voluntary on-line questionnaire for fishers to complete, to provide details of interactions with cetaceans and of any damage caused, to be posted soon.

The initiative is being   implemented in partnership with the following organizations in the different subareas: Asociación Herpetológica Española (AHE,  https://herpiberica2018.usal.es/sponsor/ahe/) in Spain, the MareCamp Association in Italy ( https://www.marecamp.com/it/) and the Malta College of Arts, Science and Technology (MCAST) in Malta (https://www.mcast.edu.mt/about-mcast/ )

For more information: download the Concept note of the Interaction between cetaceans and small-scale fishers in the Mediterranean (in English, Spanish, Italian and Maltese).