147 tons of marine litter fished from the Baltic:

Fishing gears lost at sea and their impact on the marine environment are subject to numerous research and actions globally. One of the most successful projects in this respect , “Clean Baltic”, is being finalized along Poland’s coastal waters including the Lagoons, with the involvement of over 500 small-scale fishers.

3 LIFE Polish Member Organizations got involved in this large-scale project. The latter was developed thanks to the European Maritime and Fisheries Fund monies made available to Poland as part of the “Fisheries and the Sea 2014-2020” Operational Programme. We are glad to see that EU subsidies have been used for a universally positive purpose – improve the state of the marine environment where Polish small-scale fishers operate, while also benefitting other sea users.

The fishers retrieved a total of just under 147 tons of waste. Most retrieved fishing gears were gillnets, but trawls, trap nets, lines and pots were also fished out. The retrieved nets contained fish and other marine organisms, such as birds and mussels and even one dead grey seal. The project was not confined to fishing gears only and fishers took out many other objects, such as buoys, Styrofoam, boxes, lines, tires, remains of steel elements, as well as smaller waste such as gloves and plastic bags.

LIFE is proud to be part of the project, and we take the opportunity to thank all those involved – the fishers and their organizations, the MARE foundation (http://fundacjamare.pl) and administration bodies. But most importantly, we are pleased to witness the strong involvement of the fishers in the project activities, and their feeling of co-responsibility for the state of marine environment, including fish stocks, on which their livelihoods depend.

See the fishermen in action below !

A meeting in Nieuwpoort, Belgium on September 1st, organized by Belgian inshore fisherman Jan De Jonghe and attended by a variety of commercial fishermen from the UK, Belgium and Holland as well as staff from the Low Impact Fishers of Europe Platform [LIFE] and researchers from the Marine Institute, highlighted the increasing concerns over the negative impacts of the massive and uncontrolled rise in electric pulse beamers in the southern North Sea. A delegation from the meeting later met with a senior official from the Dutch government, Ms Bea Deetman, responsible for European fishing authorizations and regulations. Electric pulse trawlers do what it says on the tin, they fire electric pulses into the seabed and this effectively replaces the job that tickler chains normally do to push the fish up and into the path of the net. The gear used is much lighter than traditional beam trawls, uses less fuel to tow, appears to catch more Sole than Plaice and has much lower rates of bycatch. 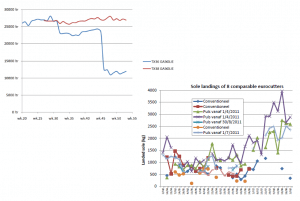 So far so good, but despite the protestations of the pulse fishermen that the outputs in terms of both pulse shape and power can be and are strictly controlled, observations by other fishermen and scientists contradict the view expressed that it does no harm to either the target or other species on and in the seabed.

The use of electricity [as well as poisons and explosives] is specifically banned under the Common Fisheries Policy so all those currently using this gear [Dutch national and subsequently UK flag ships] are operating under a dispensation from the European Commission. They benefitted from an original derogation for 5% of the member state beam trawl fleet, together in some cases with very significant financial support from Europe and this number then increased dramatically through the imaginative use of Article 14 of the new CFP that states that “Member States may conduct pilot projects, based on the best available scientific advice and taking into account the opinions of the relevant Advisory Councils, with the aim of fully exploring all practicable methods for the avoidance, minimisation and elimination of unwanted catches in a fishery”.

What is abundantly clear is that there has been insufficient research and effective trials before the Commission, the Dutch government and beam trawl fishermen jumped in with both feet on the basis of the apparent benefits of the method [especially to profit margins]. Current numbers of pulse beamers are well over a hundred and probably increasing with much of the focus of effort on the southern North Sea. The pictures below illustrate the migration of what were beam trawlers converted to pulse fishing to the previously unfished areas off the Thames. 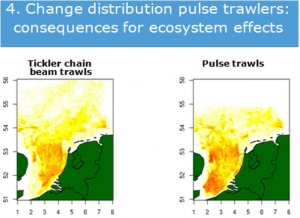 The meeting heard testimonies from a range of fishermen, all of whom highlighted that there had been a drastic decline in sole, cod and seabass since the introduction of large scale pulse fishing 3 years ago, some reported seeing and hauling up large quantities of dead fish. Some referred to the Southern North Sea as a dead zone. Others mentioned that the only fish they had seen were (spotted) dogfish and rays.

The concerns expressed were really summed up by a note written by Tom Brown of the Ramsgate Fishermen’s Association, a précis of which is reproduced below:

“In the Thames estuary, we have an area between the Knock and Falls that is just outside our 12 mile limit. [see pictures above. Ed] In the past the traditional beam trawlers could not work there because of the soft ground, we only had the occasional French trawlers.  However, for the past four years we have been inundated with Pulse trawlers.  This area is well known to us as being a Dover sole feeder area for the Thames estuary.  In the wintertime when the sea turns cold the sole heads for deep water and buries itself in the mud.  With the advent of the Pulse trawlers they have become vulnerable. When the Pulse Beamers first fished this area they couldn’t believe how lucrative it could be, so much so that they were rushing back to port changing crews and coming back out again. To top it all they were bragging about it on the radio.

Four years later the Thames estuary has become almost devoid of fish to the point that a number of fishermen have gone out of business and the boats fishing in the Estuary declined. Possibly this is partially due to the excessive dredging that is being carried out in the Thames but I’m sure also Pulse trawling plays its part.

Our local boats have noticed that where the Pulse trawlers have been working there is any amount of dead shellfish, starfish and small mixed fish. It appears that when working deep water, they can turn the current up and in shallow water reduce it so as not to damage other fish. We are led to understand that in order to maximise the catching ability, the power is turned up all the time. We are not in the way of progress but it must not be at the expense of the environment and other fishermen.

We are being informed that Pulse fishing is up to 3 times more efficient as normal fishing.  If that is the case, are those countries that operate pulse fishing going to reduce their fishing effort pro rata? If pulse trawling was rolled out across the EU in order to prevent technical creep I presume everybody will have to reduce their fishing effort accordingly to stay within the present parameters and not destroy the stocks again”.

Specific comments from local fishermen include:

It’s not just inshore fishermen from around the southern North Sea who are concerned. The ICES Working Group on Electrical Trawling met three times (22–24/10/2014; 10–12/11/2015, and 17–19/01/2017) to discuss the ongoing research projects in Belgium, the Netherlands, and Germany and provide an overview of the state of the art knowledge of the ecological effects. Their final report states that; ‘The sole pulse applies a higher frequency that invokes a cramp response that immobilise the fish species facilitating the catching process.  The use of electricity in fishing has raised considerable concern among stakeholders which is mainly focused on the unknown effects on marine organisms and the functioning of the benthic ecosystem but also altered fishing efforts & catch efficiencies’. It goes on to say that ‘……… Exposure to the sole pulse stimuli invoked vertebral fractures and associated haemorrhages in roundfish species (cod), but not in flatfish species (sole, plaice, dab) or seabass. The results suggest that fractures are restricted to the larger size classes of cod that are retained in the net…..’ 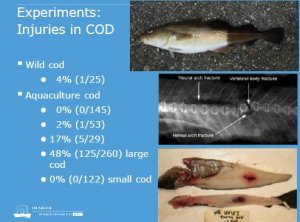 These comments underline the concerns expressed at the meeting. The Genie is out of the bottle and despite clear evidence, both scientific and anecdotal, that there are significant adverse impacts from electric pulse fishing, there appears to be no reduction in the headlong rush by managers and beam trawl fishermen for this sort of gear.

Just what the public will make of the fish on their plate having been electrocuted and their backs broken in the name of increased profits and reduced physical impacts remains to be seen although some of the larger buyers are avoiding purchasing electrofished products at present.

As Tom Brown’s note makes clear, the increased use of electric pulse fishing by increasing numbers of large vessels is undoubtedly having an adverse impact on stocks, especially those previously unfished. Whilst there is an argument that fishing effort, by whatever means, is ultimately controlled by quota, the ability of electric gears to focus effort on a relatively small area is of concern, as is the unknown and possibly long term effects on the wider marine ecosystem.

No one really expects the Commission to withdraw its current derogation but they should certainly act now contain effort, spatially, numerically and in terms of effective management of impacts until such time as there has been significantly more research into the potentially damaging aspects of this form of fishing.

If we should have learnt anything from the abject failures of fisheries management over two centuries it is that no amount of short term profit for the few should be used as a reason or excuse for ignoring longer term impacts and the rights of the many.