Expulsion of Beam Trawlers from the Skagerrak (DK). 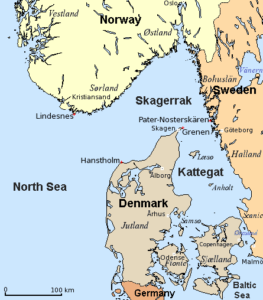 Call for the Expulsion of Destructive Beam Trawlers from the Skagerrak.

Protestors occupy Danish Ministry of Foreign Affairs in Copenhagen over the invasion of the destructive Dutch beam trawl fleet.

Copenhagen, August 28, 2019: This morning a group of small-scale coastal fishermen from Hanstholm, Thorupstrand, Løkken, Hirtshals and Skagen in northern Jutland occupied the Ministry of Foreign Affairs in Copenhagen, the national authority responsible for fisheries. Their goal is to draw attention to an environmental disaster taking place in the Skagerrak, and to demand the expulsion of the destructive Dutch beam trawl fleet that is causing it.

Normally the Dutch beam trawl fleet fishes in the Southern North Sea, but they started to invade the 3 years ago. This year their numbers have been increasing due to poor catches of sole further South along with the banning of electric pulse fishing.  Some pulse vessel owners decided convert to twin rig beam trawling and relocate to the Skaggerak in search of better fishing. The status of plaice and sole stocks in the southern North Sea is a cause for concern, with Dutch pulse vessels and beam trawlers only able to catch between 60% and 70% of their quotas.

The Danish fishermen are calling for an immediate halt to the destruction of the marine environment and their fishing grounds; they demand that the Skagerrak is closed to beam trawling.

Having depleted resources in the Southern North Sea, Dutch beam trawlers have now shifted their attention to the Skagerrak. The twin rigged trawls may measure up to 12 metres wide and weigh up to 9 tonnes. These trawlers are systematically ravaging the seabed in the Skagerrak, making it impossible for local small scale fishermen to fish and transforming the fishing grounds into a desert.

“We simply can’t make a living any more. The seabed is being destroyed and the fish are gone. Now the responsible authorities must act, “ says Jesper Olsen, fisherman from Thorupstrand and spokesperson for the fishermen.

“Beam trawlers must leave Skagerrak for good. Neither the fish and the marine environment nor the small scale fishermen will survive if they stays”, says Henry Fjord, fisherman from Hanstholm. CONTACT:

Beam trawling is one of the least selective and most destructive fishing methods. Using heavy chains to dig through the seafloor to force the fish into the net. After prolonged dragging only starfish and small dabs are left alive, leaving the fishing grounds covered with wounded and dead fish, and causing a major loss of biodiversity. The Dutch government, backed by EU subsidies, encouraged the beam trawl fleet to convert to electric pulse fishing without any prior impact assessment. In January 2018, the European Parliament voted to ban pulse fishing, and this should have been phased out.

A ban on the use of electric pulse gear and overfishing on plaice and sole in the southern North Sea has prompted these vessels to convert to twin rig beam trawling and relocate to Skagerrak.

The fishermen also suspect the beam trawlers of fishing above their quota. Therefore, they demand that a checkpoint is set up in Hanstholm so that authorities can check whether the trawlers’ catches are within the allowable quotas. Danish small-scale fishermen also believe that the quota for plaice in Skagerrak should be reduced.

The coastal fishermen plan to remain in the Ministry of Foreign Affairs until they have been promised that a checkpoint will be set up in Hanstholm. They have a meeting with the Minister of Food, Fisheries and Gender Equality Mogens Jensen (S) at. 15.00 today, and have also invited the Minister of the Environment Lea Wermelin (S), other members of parliament, the press and NGOs to visit the delegation of fishermen.